Do I need a Home Inspector

With the current environment of skipping home inspections, clients often call me and ask if the need a home inspection.   The most likely reason is the seller did not want them to have one and/or the real estate agent recommended that we not get one.  Addressing the first one, the current seller is the one that has something to lose by inspecting the home.   Often things come up that the seller does not disclose, such has the age of systems in the home or defects in the home. The second most common is my agent advised against this.  I always ask that client is the realtor going to pay for problems with the house and by declining an inspection, you are removing a major issue for the agent, one that he or she is getting paid for.  You should never waive a home inspection.

What Home Inspector may find

In the last few weeks, I have had two major issues, with homes in the 300 K range, with home inspections that costed the buyers around five hundred dollars.  The first one claimed in writing on a signed disclosure that the home had geothermal heat.  It had an eleven-year-old Goodman gas heater and central air that was also eleven years old.  Geothermal upfront cost and offers substantial energy savings.   To bad the seller either made this up or did not know.  In any event, discovered this and the buyer backed out of the deal.   Had the inspection not been done, the buyer would have been left with no recourse except, through the Judicial process and no one wants that.  This buyer is thankful he did not waive home inspection.

This week I also had a small starter home along Preston Highway and the seller claimed in writing the central air was four years old.   The unit had rust on it and the paint was fading.   Young first-time buyers often have limited funds and replacing an air conditioner would set them back several years.   Central air units have serial numbers with date codes on them.  This one was nineteen years old, it still worked.  These units generally last, less than 19 years.  Even though it still worked, I advised the buyer she could have an HVAC person check it out or better yet just save the money for a new one.  If she waived home inspection she would have had trouble coming up with the money to fix this.

Do I need a Home Inspector 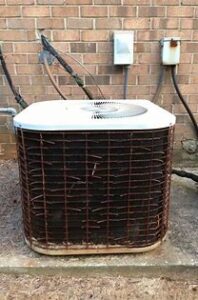 The customer was told this unit was four years old