While performing home inspections, I often see stupid things people due to their home.  Most often I see these in additions, self-installed items and always wonder why they do something so foolish.  I was looking at a home in 40272 today, not for the purpose of a home inspection, rather to purchase myself and make an equity investment in the property.  Everything required repair, but when I stepped outside the deck caught me by surprise.  My first thought is this was some type of “peg” game or a checkerboard, I quickly started laughing, the prior owner had drilled holes into the decking, below the central air.   They had used this to discharge the heat from the blower of the central air.  I have been in thousands of homes and never seen this before.  Building code requires thirty-six inches access in all directions.   Servicing and replacing the unit would be next to impossible.   Most deck inspections yield major problems, this is a new one on me.  The holes in the deck boards are so large and so frequent that it was unsafe to walk in this area of the deck.  The second question I had is central air units put out a considerable amount of heat.  With just a few inches space for air to circulate, I question if this is a fire hazard.  Servicing the central air would be a disaster, it might require removing part of the deck.  I had not planned to do a full deck inspection on this property, it would have yielded worse results.

I hope when I inspect the home you are getting ready to purchase, we do not have a prior owner that did stupid stuff to the home. 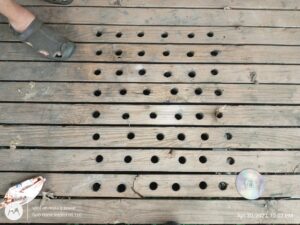 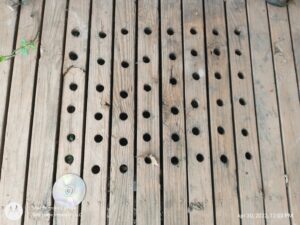